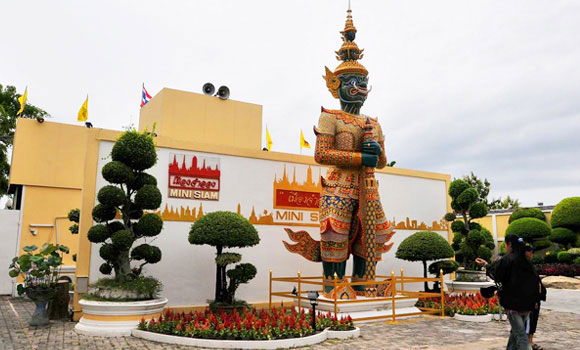 It's cheesy, it's tacky and it's cliche, but busloads of tourists still make their way to this attraction on the main highway in Pattaya.

Mini Siam is a re-creation in miniature of many of Thailand's major tourist attractions, as well as reconstructions of a few structures from the past. Here you'll find copies of the Temple of the Emerald Buddha from Bangkok, the ancient Khmer temple of Phimai in Nakorn Ratchisima province, and even Bangkok's Don Muang International Airport.

Upon entering Mini Siam, and before you get to the Thai portion, there's also a front garden filled with miniature recreations of many notable monuments from around the world, such as the Eiffel Tower, Statue of Liberty and Abu Simbel. Of course, there's also some souvenir shops as well as a few side-show games.

Hosted and developed by Hosting-Group Co., Ltd.
Powered by expub.net