Ripley's Believe It or Not Museum 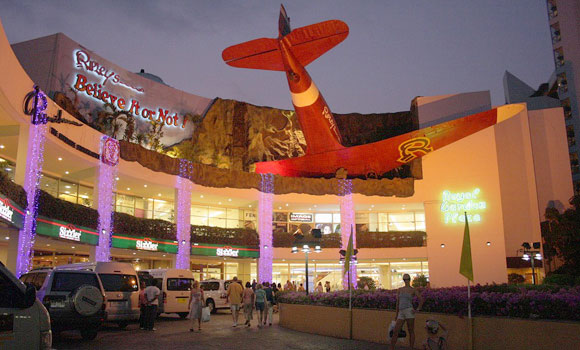 Robert Ripley's first "Odditorium" at the Chicago World's Fair in 1933 attracted almost 2 million people. Today, Ripley's Believe It or Not! Museums attract millions of visitors all over the world! As you can see, many of these buildings are as odd as their exhibits!

The Pattaya branch of this world famous franchise displays odd artifacts and unlikely objects from all over the world, as well as demonstrating peculiarities of human perception such as optical illusions and examples of human depravity such as primitive torture devices. It is located on the top floor of the Royal Plaza Building on Beach Road in Pattaya. Odd stories and objects are collected from around the world. The museum is open daily from 11 am to 9 pm and charges an admission fee of 100 baht per person. Also on the third floor of the Royal Plaza Building are a simulated thrill ride called Ripley's Motion Master theater, and a simulated laser combat game.

Hosted and developed by Hosting-Group Co., Ltd.
Powered by expub.net